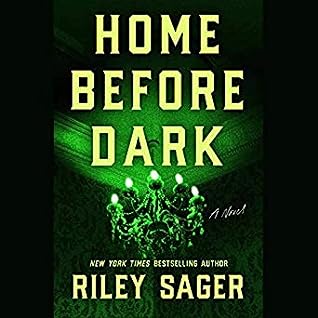 Maggie Holt is used to such questions. Twenty-five years ago, she and her parents, Ewan and Jess, moved into Baneberry Hall, a rambling Victorian estate in the Vermont woods. They spent three weeks there before fleeing in the dead of night, an ordeal Ewan later recounted in a nonfiction book called House of Horrors. His tale of ghostly happenings and encounters with malevolent spirits became a worldwide phenomenon, rivaling The Amityville Horror in popularity—and skepticism.

Today, Maggie is a restorer of old homes and too young to remember any of the events mentioned in her father’s book. But she also doesn’t believe a word of it. Ghosts, after all, don’t exist. When Maggie inherits Baneberry Hall after her father’s death, she returns to renovate the place to prepare it for sale. But her homecoming is anything but warm. People from the past, chronicled in House of Horrors, lurk in the shadows. And locals aren’t thrilled that their small town has been made infamous thanks to Maggie’s father. Even more unnerving is Baneberry Hall itself—a place filled with relics from another era that hint at a history of dark deeds. As Maggie experiences strange occurrences straight out of her father’s book, she starts to believe that what he wrote was more fact than fiction.

Wow, I LOVED this book. I’m glad I used my Libro.fm credit for Riley Sager’s newest release! Lately, I’ve been eating up books centered around big, spooky houses and the people who currently inhabit them or those who left dark secrets in the past. Home Before Dark certainly fit these criteria and was so much fun to listen to!

“[…] perception is a tricky thing. When people think of you a certain way, it’s almost impossible to put that genie back in the bottle. And when the world considers someone a monster, people treat them like one, and it isn’t long before that person starts to believe it as well.

I thought this book was really unique with the book within a book concept. It allowed the reader to fully get into Maggie’s shoes while she questioned her entire childhood through the discovery of secrets and scandals at Baneberry Hall. It made me question everything and wonder if her whole life had been a lie, while simultaneously wondering what the heck was going on! I didn’t know if this book would be a far-fetched ghost story or have a logical explanation for the events taking place. Regardless, I ate up this story from beginning to end!

I think this book would have been a lot scarier if I had read the print version, but since I was listening in the daylight while working on chores around the house, it didn’t have quite as much of a spine-tingling quality.

This was such a great book for me, I only wish it could have been longer to make the experience last! I can’t wait to read (or listen to) more of Sager’s books in the future. His last two releases were huge hits for me. I’m a fan of the creep-factor and am anxious to catch up on his backlist. If you’re looking for books for those fall-feels, I highly recommend this one. Bring on the cooler weather, comfy clothes, and atmospheric books! I’m ready and I’m sure most of you are too.