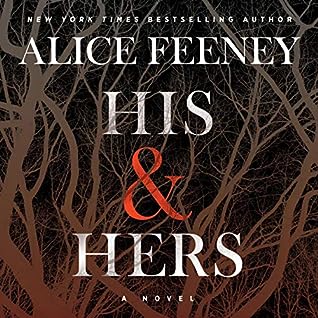 Many thanks to Libro.fm for the chance to listen to this book early!

There are two sides to every story: yours and mine, ours and theirs, His & Hers. Which means someone is always lying.

Anna Andrews finally has what she wants. Almost. She’s worked hard to become the main TV presenter of the BBC’s lunchtime news, putting work before friends, family, and her now ex-husband. So, when someone threatens to take her dream job away, she’ll do almost anything to keep it.

When asked to cover a murder in Blackdown—the sleepy countryside village where she grew up—Anna is reluctant to go. But when the victim turns out to be one of her childhood friends, she can’t leave. It soon becomes clear that Anna isn’t just covering the story, she’s at the heart of it.

DCI Jack Harper left London for a reason, but never thought he’d end up working in a place like Blackdown. When the body of a young woman is discovered, Jack decides not to tell anyone that he knew the victim, until he begins to realize he is a suspect in his own murder investigation.

One of them knows more than they are letting on. Someone isn’t telling the truth. Alternating between Anna’s and Jack’s points of view, ‘HIS & HERS’ is a fast-paced, complex, and dark puzzle that will keep listeners guessing until the very end.

Wow! His & Hers was a surprise! I know Alice Feeney has become quite popular recently for her Thrillers, but even with the best of intentions and planning to read her previous work, this was my first book of hers. This audiobook kept me engaged from the very beginning. The differing perspectives, with their excellent narration, and the mysterious distorted voice for one character captured my attention and made me eager to continue. I certainly love an audiobook that makes me look for extra chores around the house so I can keep listening. This is productivity at its finest!

I was certain about halfway through I had pegged the ending of this story, and for any other Thriller, I might have been right. Luckily for readers (and listeners), Alice Feeney had a few tricks up her sleeve that literally made my jaw drop! I won’t give too much away because it’s best to go into this story as blind as I did. It made for a very fun listen that had my heart pumping double time!

I rarely give content warnings when it comes to stories, but I’m beginning to see the necessity of them when it comes to certain books. I did struggle with some of the subject matter in this story – from animal abuse, to sexual grooming and rape, to a young same-sex relationship. I especially struggled with the underage rape in this story and was surprised the book contained it in the first place. However, as we begin to learn more about how often these things happen in our world, it is important to raise awareness. Oftentimes, we think things like this aren’t happening and definitely not as frequently as it currently seems. This should be a sensitive subject for everyone.

While I struggled to listen to the detail of certain events in the book, especially in the latter half of the story, I couldn’t give this book anything less than five stars for the pure shock of the ending. This was a great audiobook!

Audiobook from Libro.fm
Purchase on Amazon.