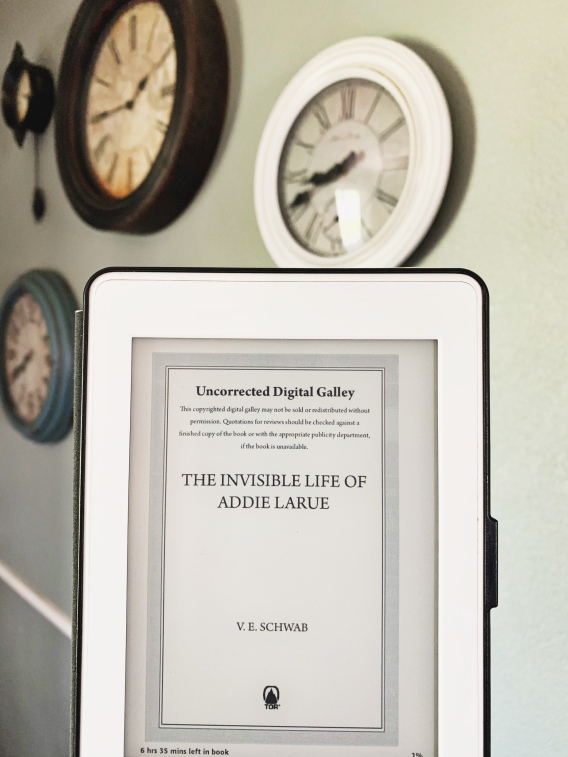 Many thanks to Netgalley and Tor Books for the chance to read this book early.

Prior to The Invisible Life of Addie LaRue, I’d never read a V.E. Schwab book, but as soon as I came across this blurb I couldn’t resist! And my goodness, V.E. Schwab can WRITE! I absolutely wanted to absorb every word because the writing was exquisite. It’s rare to come across writers who have a knack for infusing such beautiful sentiments and wisdom in their stories combined with an epic talent for writing.

I’m always drawn to inventive storylines that feature some element I’ve never read before. This book took the idea of immortality and put a spin on it. Every time a door was closed or from one day to the next, Addie was forgotten by everyone, until one man with a story of his own remembers her. There were a few issues with the execution of the details of Addie’s curse, however. There were many times Addie was on a date with someone, but her dates never got up to go to the bathroom or visit another room. To make this aspect realistic, there should have been more instances of Addie being forgotten throughout her daily life.

A Life No One Will Remember. A Story You Will Never Forget.

France, 1714: in a moment of desperation, a young woman makes a Faustian bargain to live forever and is cursed to be forgotten by everyone she meets.

Thus begins the extraordinary life of Addie LaRue, and a dazzling adventure that will play out across centuries and continents, across history and art, as a young woman learns how far she will go to leave her mark on the world.

But everything changes when, after nearly 300 years, Addie stumbles across a young man in a hidden bookstore and he remembers her name.

While I greatly enjoyed the concept and writing, I found my enjoyment of the actual story to come in waves. There were interesting moments mixed with rather mundane daily events. My mind would wander during the slower moments and I would struggle to stay invested due to the short chapters. It took me exactly a week to finish this book which is an incredible length of time for me to spend on one novel. I think if it had been shorter, I would have enjoyed the experience exponentially more. I also would have enjoyed more characterization of Addie. She didn’t seem to have many interests outside of her condition, which caused her to float from day to day. There weren’t notable traits she possessed besides being forgotten and her seven freckles.

“I remember seeing that picture and realizing that photographs weren’t real. There’s no context, just the illusion that you’re showing a snapshot of a life, but life isn’t snapshots, it’s fluid. So photos are like fictions. I loved that about them. Everyone thinks photography is truth, but it’s just a very convincing lie.”

As a personal preference, I wasn’t exactly excited about the great many deviant sexual relationships throughout the middle of the book. I felt as if every character for a chunk of the story was gay or bisexual just for the sake of being so. To me, it didn’t fit with the storyline and seemed done as if in an afterthought to win audiences’ approval.

Despite my hang-ups, I enjoyed the artistic aspect of the story, the idea as a whole, and the ending of the novel. I think it was all tied together in an interesting way and I was excited about the pace in the latter quarter of the story. Overall, it wasn’t the huge hit I was hoping for, but I’m quite glad I made the time to read about Addie’s invisible life. It was a nice escape from the real world and the endless negative news in the world right now. It made our momentary trails seem like a blip in the pond in the big scheme, which is one of the many benefits of reading.