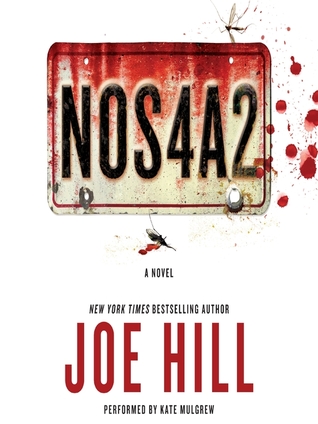 I added the audio of NOS4A2 to my Overdrive holds list months ago, thanks to @whatmeganreads‘ excitement on Instagram. I can’t resist an exciting audiobook and Megan’s animation made me eager to check it out. I secretly hoped it would become available during the Fall/Halloween season and luck was with me!

When I started listening to this audiobook, it took me some time to work out what was happening. I’m not sure if I was distracted while I was listening or if it was the nature of the story. Eventually, I became as entranced in the story as Megan seemed to be. I didn’t want to stop listening and would pop my earbuds in every chance I had for just a few more minutes of the story.

Victoria McQueen has an uncanny knack for finding things: a misplaced bracelet, a missing photograph, answers to unanswerable questions. When she rides her bicycle over the rickety old covered bridge in the woods near her house, she always emerges in the places she needs to be. Vic doesn’t tell anyone about her unusual ability, because she knows no one will believe her. She has trouble understanding it herself.

Charles Talent Manx has a gift of his own. He likes to take children for rides in his 1938 Rolls-Royce Wraith with the vanity plate NOS4A2. In the Wraith, he and his innocent guests can slip out of the everyday world and onto hidden roads that lead to an astonishing playground of amusements he calls Christmasland. Mile by mile, the journey across the highway of Charlie’s twisted imagination transforms his precious passengers, leaving them as terrifying and unstoppable as their benefactor.

And then comes the day when Vic goes looking for trouble…and finds her way, inevitably, to Charlie.

That was a lifetime ago. Now, the only kid ever to escape Charlie’s unmitigated evil is all grown up and desperate to forget.

But Charlie Manx hasn’t stopped thinking about the exceptional Victoria McQueen. On the road again, he won’t slow down until he’s taken his revenge. He’s after something very special—something Vic can never replace.

It’s been a long time since I’ve read a horror novel and I wasn’t sure how I would respond, considering my sensibilities have become a bit more delicate since I’ve had children. Somehow I didn’t find this book scary in the least. It seemed to me more of a fantastical/sci-fi/thriller mash-up than a scary, read-during-the-day only novel. The most bothersome aspect was some of the cringe-worthy language. I suppose I’ll see how Joe’s dad’s brand of horror compares to this one soon. 😉 Speaking of which, I enjoyed catching some of the subtle references to Stephen King’s novels.

My favorite parts of this novel included Joe Hill’s ability to very literally bridge the gap between childhood and adulthood. The magic and innocence of childhood was evident, yet we were able to see how that magic begins to fade as the years add up and life leaves us jaded. Vic was wonderfully flawed. Events beyond her control from childhood left her broken, yet she never stopped trying to be the mother she knew her son deserved. I absolutely loved seeing the struggles of every mother written so clearly through the eyes of a male author.  I also loved the idea of the inner world meeting the physical world for a few special creative types. As someone who lives in their head almost more than the real-world, these types of stories always entrance me.

A few small complaints: throughout the story, we keep hearing about Christmasland, but the actual place doesn’t show up until the end – briefly. I wish more of this world, which was a main idea in the story, would have had more than a cameo. I also noticed some flaws in the guns the police officers in the story used, which is a bit annoying. I find many authors like to incorporate guns into their stories, but don’t properly research the appropriate language to use or the types of guns people in certain positions would have. It won’t matter to most readers, but it’s a pet peeve of mine.

After reflecting upon the entire book, I’ve come to realize the plot was quite repetitive, but the writing was so well-done, I couldn’t stop listening. I couldn’t wait to see what thoughts the characters would have or what they might say next. I think the combination of the excellent narration and Joe Hill’s voice through his writing made the story completely captivating. I especially loved the afterword on the audio from Joe himself. I always appreciate hearing directly from the author about the work they have put in, what inspired them, or really any detail they feel like sharing. It makes the reading experience more personal.

Overall, I was spellbound by the humanity in the pages and the pacing of the story, but a few flaws made me knock a star off of my rating.