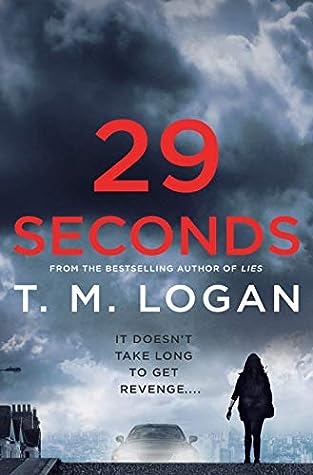 Many thanks to St. Martin’s Press & Netgalley for the chance to read this novel.

T.M. Logan’s sophomore release was a tense, rage-inducing read! I didn’t know much about this book going into it (just how I like my Thrillers), except for what the blurb said. I thought based on the information readers are given, I had this one figured out. Boy, was I wrong!

Give me one name. One person. And I will make them disappear . . .

When Sarah rescues a young girl in trouble, she expects nothing in return. But her act of bravery puts a powerful and dangerous man in her debt. He lives by his own brutal code, and all debts must be repaid – in the only way he knows how.

He offers Sarah a way to solve a desperate situation with her intolerable boss. A once-in-a-lifetime deal that will make all her problems disappear.

No consequences. No comeback. No chance of being found out.

All it takes is a 29 second phone call.

Because everyone has a name to give. Don’t they?

I couldn’t believe the audacity of Sarah’s boss in this book. This fictional character’s behavior made me nauseous and squirmy in the comfort of my own home! In the world we’re living in, we, unfortunately, know many cases of women being blackmailed and sexually harassed in the workplace, but nothing made those stories more clear to me than this book. Oftentimes, looking in from the outside, we assume people could put their foot down and fight back. Just by sheer will, they should be able to avoid sexual harassment. 29 Seconds made it clear as crystal that isn’t always the case…and it was terrifying to imagine.

I found myself chanting, “Just make the call!” and “Call already!” as I was reading each encounter with Sarah’s boss. He was the scum of the earth and I was ready for him to be gone. I was sure I knew how things would play out and I felt as if I was waiting forever! Sarah’s situation felt so hopeless, I could hardly stand the tension of waiting for her to take action.

What came next simultaneously made my jaw and stomach drop!

I was impressed by the originality of this story and the topics it tackled. Even as a woman myself, this book opened my eyes to situations women should never find themselves in, but unfortunately, do. This book easily kept my attention and tapped into my emotions in a way I didn’t expect. There were a few slow points for me, that could’ve been shortened or edited out. I also was unsure of a fade to black scene. I prefer to have more of the action written out for me, rather than hearing about what happened later on. Nonetheless, this was a good read by an author I will continue to follow. T.M. Logan is able to write Thrillers I think about months after I turn the last page.

Pick up a copy on release day: September 10.