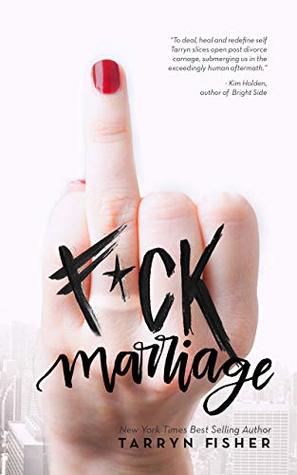 You guys have heard me gush about Tarryn Fisher’s books for quite a while now (that’s an understatement). She was one of the first authors I discovered when I started reading avidly again and quickly became my favorite. She has a way of injecting wisdom into every book in a unique way I’ve never experienced before. Her words hit me deep in the heart and have helped me to become a more confident woman. Naturally, when she releases a new book, I gobble it up like my life depends upon it, even when the title makes my friends worry about the state of my soul. 😉

Two years ago, Billie Tarrow’s husband left her for another woman. Shamed and divorced, Billie retreated to her family home in Port Townsend, far from her old life in New York. After a near-death encounter, Billie decides to return to the city that took everything from her.

But sometimes in the midst of heartache, hope suffocates the pain.

Satcher Gable has carried a torch for Billie for ten years. When she suddenly returns to New York a single woman, he can’t believe his good fortune. But convincing her to walk away from her heartache is proving more difficult than Satcher anticipated. A changed woman, Billie’s only goal is revenge.

The first half of this book was a joy to read. I was highlighting line after line and was eager to see where Billie’s journey would take her. I love Tarryn’s broken characters because they help women feel as if the things they’ve been through aren’t unique to them. They bring people together and make us all feel less alone. Billie was no different, having gone through a traumatic divorce. She shows readers that healing doesn’t happen immediately, even two years later, Billie was still struggling to regain her footing.

“I’ve already been on life’s ride from hell. I know all the turns.”

Unfortunately, after the halfway mark in this book, the story crumbled. Billie wasn’t a character I could resonate with in the least and she became desperate and wishy-washy. I felt as if the plot twists were too cliche for a Tarryn Fisher novel and didn’t add to furthering the story. The characters were twisted in an indistinguishable web that I didn’t care to untangle. I found their reasons for hurting one another to be unrealistic excuses for bad behavior – no one accepted responsibility for their actions and it was exhausting. Thankfully Satcher made the story more bearable for me, but he still didn’t do anything worthwhile enough for a lengthy mention.

“We aren’t meant to stay the same. Life hits us from every direction, and we build thick skin in those places … calluses. It’s the way we survive.”

Most disappointing for me was the lack of closure on some of the details added to this story. The ending felt rushed and made me ponder the unanswered questions for hours after I finished. This simply is not a five-star book. It was too unorganized and felt pieced together.

The good news is that Tarryn writes books for all women, meaning all of us won’t relate to every book she writes. I’m more of a Margo and you may be more of a Senna, or Yara, or Billie. Naturally, women who have been wronged or through a divorce are going to relate to Billie in a big way. Authors are continually pushing their limits and evolving, just as the rest of us, and it’s ok to not find a piece of yourself in every book they write. Regardless, I’m going to continue to have high hopes for anything Tarryn puts out and be eagerly awaiting it with a greedy heart.