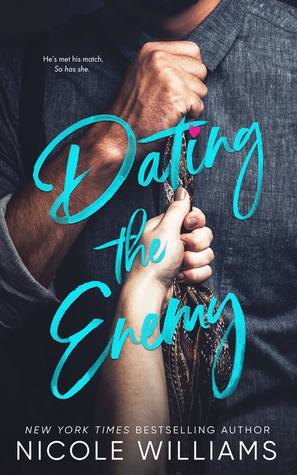 Thank you so much to my friend, Talon at Under the Cover Blog, for recommending Dating the Enemy to me! Talon is like my personal book dealer for a  wonderful addiction. There are very few books I haven’t loved that she’s recommended and even the ones that weren’t my favorites were still great stories, my own issues simply got in the way! Definitely hop over and give her a follow if you aren’t already. Her reviews are always honest and to the point. Just be prepared for your TBR to expand.

Ms. Romance believes in true love and soul mates. Mr. Reality believes love is a term humanity has assigned to the primal instinct to procreate. She believes in fate—he in chance. She knows there’s one right person for everyone—he knows there are multiple ones. The two writers couldn’t be more polarized on relationships. They’re professional rivals, and philosophical antagonists.

For eight years, their battles have been fought with words and ink. That changes when they apply for the same position at the World Times and find themselves face-to-face for the first time. Brooks isn’t the sour-faced, antiquity of a man Hannah pictured. And Hannah isn’t exactly the middle-aged shrew with cat hair on her housedress that Brooks imagined either.

In lieu of competing for the promotion traditional ways, the two writers are presented with playing the leading roles in a social experiment unlike any before. Can a person be tricked into falling in love? Can a relationship be crafted under the right string of circumstances? Hannah knows the answer. So does Brooks.

Agreeing to the terms, the two set out on a three-month dating experiment, live-streamed for the world to watch. All Hannah has to do to win is not fall in love with the narcissistic brute. All Brooks has to do is get the starry-eyed dreamer to fall in love with him. Both are so confident in their philosophies, they expect the challenge to be easy.

With the world watching, Brooks and Hannah will be forced to confront their beliefs and conclude, once and for all, who’s right. The answer is one neither of them saw coming.

It doesn’t happen often where I find myself torn between which character I like better, the male or female lead of the story. When it came to Mr. Reality and Ms. Romance I could not pick a side. I was simply along for the ride, enjoying their snarky banter the whole way through. I especially loved the angst between these two. In many ways, this book reminded me of 10 Things I Hate About You, one of my favorite go-to chick-flicks to get lost in when I have experienced a horrible day. At the top of the “Tropes I Love” list, lies Enemies to Lovers. I enjoy the tense situations, the denial, and the competition that often ensues before the characters realize their love for one another. I don’t care if it’s predictable or if I’ve read it 85 times already, give me the book.

I loved watching these two attempt to prove the other wrong throughout the whole story. Eventually, it seemed as if the whole point they were trying to prove became muddled and lost on them, which was exactly the point I think the author was trying to prove. When it comes down to it, love is love. Even the most cynical or romantic hearts are not immune to it when it decides to sink its clutches into us. This is the exact reason I could not choose between Brooks or Hannah’s philosophies. They both were right in their own ways and it ultimately didn’t matter who would “win”.

My favorite thing about this story were Hannah’s attempts to convince herself Brooks was the biggest jerk on the planet. He was completely misunderstood and had a huge hidden heart beneath the tough exterior. These are my favorite book boyfriends to read about, just to watch the transformation in the end. Again, I don’t care if I know it’s coming, I still love it every single time!

This was only my second Nicole Williams book, but I definitely have to check out more by her in the future. I read Collared a few years ago and was blown away by the storytelling. There are quite huge differences between the two books, making her seem to be an incredibly versatile author.

If you’re looking for a fast, fun read to unwind with over the weekend, reminiscent of a great chick-flick, definitely pick this one up. It’s free on Kindle Unlimited or can be read for under $3!