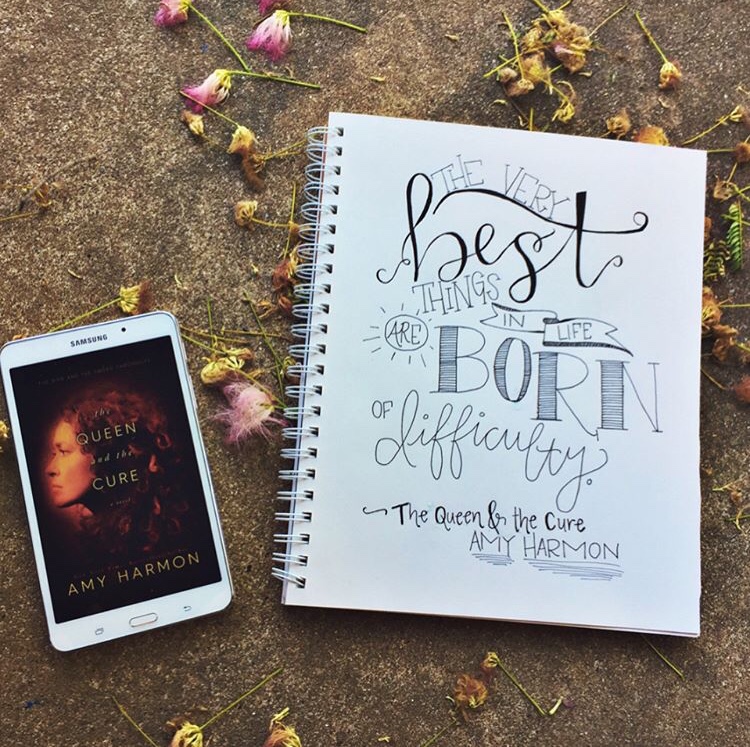 “The Gifts we are given are not given for our benefit but for the benefit of mankind.”

Was Amy speaking of herself with this quote?  Seriously, the woman’s gift of writing is a benefit for mankind.  Every time I read one of her books I am in complete awe of her writing abilities.  She crafts such in-depth stories and some of the most romantic scenes I have ever read.  To be honest, I’m not the biggest fantasy fan, but that does not stop me from snatching up Amy’s books as soon as they are released.  Whether I prefer the genre or not, I know I will be getting a beautiful story with some of the most incredible writing out there.  The Bird and the Sword was one of my favorite reads of 2016.

The Queen and the Cure picks up two years later where The Bird and the Sword left off, with Kjell’s story.

Kjell of Jeru had always known who he was. He’d never envied his brother or wanted to be king. He was the bastard son of the late King Zoltev and a servant girl, and the ignominy of his birth had never bothered him.

But there is more to a man than his parentage. More to a man than his blade, his size, or his skills, and all that Kjell once knew has shifted and changed. He is no longer simply Kjell of Jeru, a warrior defending the crown. Now he is a healer, one of the Gifted, and a man completely at odds with his power.

Called upon to rid the country of the last vestiges of the Volgar, Kjell stumbles upon a woman who has troubling glimpses of the future and no memory of the past. Armed with his unwanted gift and haunted by regret, Kjell becomes a reluctant savior, beset by old enemies and new expectations. With the woman by his side, Kjell embarks upon a journey where the greatest test may be finding the man she believes him to be.

I was immediately enveloped in the start of the story and loved getting to know Kjell better throughout.  He reminds me of my husband, so what’s not to like?  He seems grumpy and angry at the world but has the softest heart and deepest feelings of anyone (don’t tell my husband I shared his darkest secret). When Kjell and Sasha met I was swooning all over the place. Their interactions combined with Sasha’s persistence and innocent demeanor drew me into their unique and budding romance. I couldn’t get enough of the two of them together. The angst the characters experience was so well done, the mystery of both characters’ pasts, as well as the suspense of what was yet to come,  was truly masterful. Not to mention my favorite aspect of a series: catching up with previously loved characters.  My heart was soaring with the addition of a few of Lark’s famous words given in new poems, as this was my favorite piece of the last story. One of the best of parts of The Queen and the Cure, in my opinion, was the subtle addition of Biblical elements.  It’s something that many will enjoy, but something that is never overbearing or obvious if it is not your thing.

I was impressed with the introduction of new lands surrounding Jeru, which will allow Amy to continue the chronicles of The Bird and the Sword in the future (yay!). I am a fan of Amy’s fantasy lands for life and will be pre-ordering all of her words as they are given.  I’m truly enchanted by Jeru.