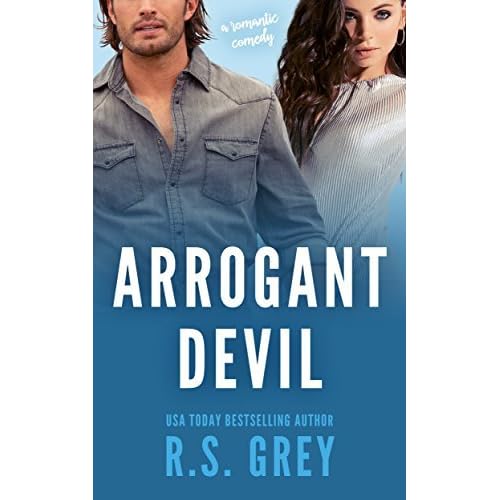 R.S. Grey has done it again! I don’t know what I can say about her books that I haven’t already said about the last seven books I’ve reviewed of hers. The bottom line is, I haven’t met an R.S. Grey book I didn’t like, with most books boasting a strong five-star rating on Goodreads from me. Arrogant Devil was no exception.

Even though I live in Texas myself, R.S. Grey has the most charming way of describing the settings and the nature of people in our home state. Oftentimes, she has me cracking up over her quips regarding the more cliche aspects and stereotypes of The Lone Star State, such as the number of churches on every corner in each small town.

As always, I absolutely adored the characters in this story. Meredith and Jack, despite their disdain for each other, were SO MUCH FUN to read about. The relationship between these two was everything I love in a story: enemies to lovers, plenty of angst, and a SL-O-O-O-OW burn. As always with Grey’s female characters, Meredith was a character I would want to be friends with in real life. She’s down-to-earth, easy going, and ridiculously funny. Her determination to make the best of a bad situation had me silently cheering her on! Go girl!!
Jack, in my opinion, was the best male lead Grey has ever dreamed up! He’s totally my type of guy, even if he is totally arrogant. His arrogance is more of a hidden tortured soul, which makes him all the more appealing. Not to mention, I love a man who’s not afraid to get to work in some Wranglers and a ball cap. Drool.

I think my favorite character, despite how much I loved Jack and Meredith, was Edith! She was the perfect example of a feisty, Southern granny! Her silly turns of phrase were surprisingly insightful, though they seemed crazy. I can picture so many different women I’ve known through the years as Edith, making her all the more realistic. My dream is to become an Edith myself by the time I have grandchildren. 😉

R.S. Grey has a way of making even the heaviest subjects feel a little lighter and fun, all while allowing her characters to show tremendous growth. I don’t know how she does it, but I’m always impressed her stories can have a strong message while still being hilarious. Arrogant Devil tackles the tough topic of emotional abuse without ever becoming overbearingly painful to read about.

If you haven’t read an R.S. Grey book, what the heck are you waiting for? I could read a book by her every day and never get tired of the stories she creates. Her stories feel like girls’ night in, with pints of ice cream, laughing until your stomach hurts, and comfy PJs. I’m sold, and you should be too!