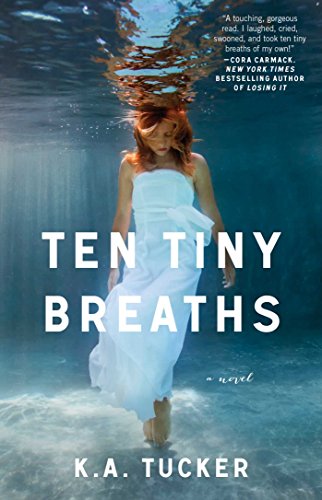 Checking another “oldie” but goodie off the TBR list with Ten Tiny Breaths. After enjoying The Simple Wild immensely, I was excited to read more by K.A. Tucker. I decided to poll our friends on Instagram to ask which book of hers I should read, and this was the product! Thanks, everyone!

I loved the story of these two sisters braving the world on their own after tragedy struck their family. Kacey was a great character and a bit of a conundrum. She was strong, yet weak and had a past I couldn’t wait to understand more about. The mystery of her story made me turn the pages quickly to get the answers I was hoping for.

When Trent entered the picture, it was in the traditional “boy meets girl” way, but we didn’t get much information about him, except that he is really, really good-looking and makes Kacey’s brain turn to mush every time she’s around him. At times, these descriptions of his attractiveness became a little over the top and annoying, because that’s all there was to the guy! I wanted some substance, though he seemed likable enough during his interactions with Kacey.

I think the secondary characters helped to make Ten Tiny Breaths even more enjoyable. I loved the relationships Kacey and her sister, Livie, were able to form with their neighbors and coworkers. In some ways it made me wish I had the type of friendships they were able to create in such a short time because it seemed like a great self-made family.

The story also had a great twist that still managed to surprise me, even though I predicted the situation before it happened. My only real issue was that the ending felt rushed to me, but I can’t exactly go into why without dropping huge spoilers. It didn’t seem realistic in many ways and left me slightly unsatisfied because I needed a deeper explanation than I received. Despite my complaints, I couldn’t stop reading this book, thanks to K.A. Tucker’s incredible storytelling. I was sucked in and didn’t want to stop reading even after I turned the last page, making me give this one four stars.

I definitely would like to see where this series goes and if there could be mentions of Kacey and Trent in Livie’s book, One Tiny Lie. I think my curiosity could be satisfied if I was able to get a little more! Alas, there are other books beckoning me first.

If you haven’t read made the time to read Ten Tiny Breaths yet either, be sure to pick it up with the links below!