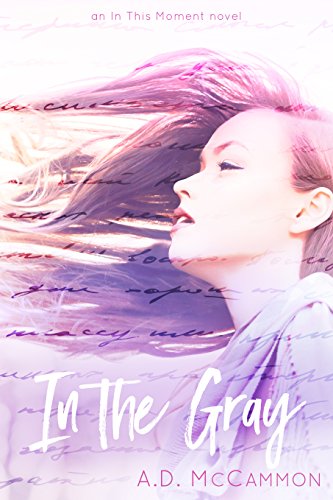 I love supporting Indie authors, especially authors who were inspired to write books by my favorite authors! A.D. McCammon is one of the authors I have followed for a long time, but have failed to pick up books by. Through Kat Savage‘s reader group, I was lucky enough to score a copy of McCammon’s upcoming release, In the Gray (In This Moment #3). Though this book is part of a series, it is a great place to start with A.D. McCammon’s work and reads perfectly as a standalone. I went into this story completely blind, trusting the writing to live up to my expectations. Fortunately, this novel kept my interest, allowing me to read over half of the story in one sitting.

When Lori Stevens gets the biggest break of her writing career, she’s forced to face her past demons from seventeen years prior. She’s hard, closed-off, and determined to push away the good things in life she has convinced herself she’s unworthy of – like Steven Duncan.

Unknowingly, Lori pushes Steven into the arms of her best friend, Cat, as she slowly comes to terms with her own budding feelings. Torn between loyalty and possible love, Lori is caught between a rock and hard place, leaving plenty of room for writing and self-discovery.

In the Gray alternates between the perspectives of Lori and Steven, along with an exciting third perspective in the latter half of the book. Through Lori’s point-of-view, I found myself endeared to her character, then abruptly annoyed by her. The walls she built up were aggravating to the highest degree because she was rude to nearly everyone in favor of protecting herself. I understood her perspective, feeling empathy for the struggles she faced, but couldn’t help wishing for her to project herself in a different way.

When Steven came along, I couldn’t help but fall for the “boy scout”. He was kind, patient, and didn’t let the negativity he had experienced in life drag him down. I mean, he’s a cop AND he takes care of his aging grandmother! Sweet to the max!

This story had a similar feel to Something Borrowed by Emily Giffin, which happens to be one of my very favorite movies (I prefer this movie to the book). However, I absolutely loathe cheating in a story and was rewarded with absolutely none of that in this book. I was grateful the author was able to create the strong feelings between the two characters without the huge deception of infidelity.

Though I gave this story a slightly lower rating, I hope it won’t deter possible readers because I truly enjoyed the book and didn’t want to stop reading. The novel provides an intriguing and important perspective on rape and assault, helping readers to understand the horrible stories we often hear these days are not simply black and white. In the Gray shows how women can be groomed or manipulated into feeling as if giving up their bodies is the only choice they are left with. It was incredibly heartbreaking to read about and feel a sense of helplessness for women who are influenced in these ways by men they trust or even look up to. I’m grateful for the insight the author provided, allowing us to be fully immersed in the gray areas.

My critique of this story is minor and has to do with a few unanswered questions I had toward the end of the story. I felt as if the ending was slightly rushed after a huge build-up and wanted a bit more information. I really enjoyed being able to read chunks of the book Lori was working on as she completed it, but I felt this section needed to be slightly polished. The writing felt quick and choppy, and I simply craved longer, more in-depth sentences and detail. I also hoped for a bit more “show, not tell” in regards to the feelings between Lori and Steven.

On the whole, In the Gray conveys important messages about how society views sexual assault while boasting a sweet and conflicting love story. Sexual assault and abuse are hot topics these days and were handled with the utmost grace by the author. In no way did this story become graphic or overbearingly difficult to read. It mostly elaborated on the emotions women feel after the event and how these terrible moments affect the rest of their lives. I greatly appreciated the amount of growth the characters showed as the story went on.

I hope readers will feel encouraged to pick up In the Gray upon its release on April 19. However, if you can’t wait until then, be sure to click the links below to pre-order this beauty!