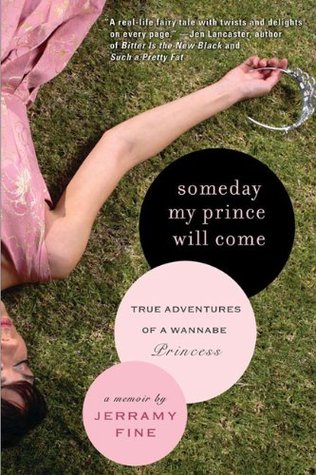 Someday My Prince Will Come: Adventures of a Wannabe Princess was one of my wonderful Christmas gifts from a friend. She read this book years ago and knew it was something I would love because of my Anglophilia. Memoirs have been among some of my favorite reads since childhood. I enjoy learning about people on a deeper level than many of us are able to experience, unless we know someone over the course of many years. Jerramy Fine’s memoir was unlike any I’ve ever experienced. It was witty, lighthearted, and a quick read.

Jerramy starts life feeling misplaced and sure she was switched at birth. She imagines her parents of English nobility somehow landed in Denver, had a baby, and left the country with the wrong child. It seems hilarious and delusional until Jerramy recounts being two years old and telling her mother, “You’re not the woman who dresses me.” From an early age, she truly seems as if she was born in the wrong place and to the wrong people. Jerramy’s world changes when she flips through the pages of a magazine and sees her future husband. It’s love at first sight with Peter Phillips, grandson of Queen Elizabeth II. From that day forward, Jerramy is bound and determined to become the princess of her Prince Charming.

My first thought upon opening this gift from my friend was, “why haven’t I heard of this book?” I was anxious to finish up my current read and start this one! It was right up my alley and Jerramy is a woman after my own heart, a kindred spirit in our love of all things British. As I began reading, I thought this memoir could be anything but serious. How could a person possibly feel such a disconnect from their own flesh and blood from birth? It seemed unreal. How could a child long for a place they knew nothing of? It seems fantastical, but the more I read, the more I believed in the possibility of a person having past-lives. I can’t even believe I’m saying it now, but I was persuaded.

One of the most impressive things about this story was the willpower Jerramy had. There is something to be said for a person chasing their dreams, no matter the cost. She went all-in and suffered for her love and the life she desired. Shockingly, these desires almost seemed to fall in her lap. I literally would be reading open-mouthed at some of the things that happened, such as dating Winston Churchill’s great-grandson. Things like that do not just happen to regular people! By the sheer force of her will, she was able to climb the rungs of the English social ladder, no small feat for an American woman from a rural, Western Colorado cowtown.

The ending of Jerramy Fine’s true story was absolutely perfect. I’ve never been a big believer in mysticism or fantastical elements in real-life, but I may have been convinced by the manifestation of the author’s destiny. Though it wasn’t the traditional happy ending readers may hope for or expect, it was more than satisfying in its conclusion. This story is full of laugh-out-loud moments and the truly extraordinary occasions that only can come when chasing one’s dream.