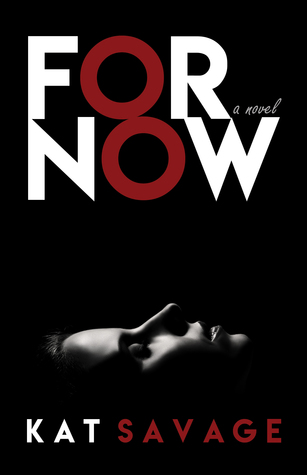 I’m always nervous to read debut novels of Indie authors because the stories are often hit or miss. If you’re like me, let me ease your mind: Kat Savage has without a doubt written a hit with For Now. I’m not just saying that because I’m a fan of Kat’s poetry collections. Of course, I hoped to love this novel, but I didn’t expect to feel the level of adoration for it that I do!

Kat’s characters are relatable and realistic. Her plotting is precise and perfectly paced. I can’t say enough good things about this story.

Delilah Spencer is broken. Alone and starting over in her best friend’s city is just what life calls for right now. She has a violent and painful past to put behind her and a lot to do to move on with her life. She has no intention of letting anyone get close anytime soon. Maybe ever.

Samuel Young used to be broken. Now, the single father accepts his past for what it is, raises his son Mason, and is trying to find some happiness. And while he thinks he’s found that in Delilah, she’s not sold.

As the two begin to push and pull, Delilah finds herself on the receiving end of strange happenings.

In a world where everyone has a past, what happens when they collide? Is the future shaken? Can they overcome it or will it rob them once again of what they deserve?

Can love survive when a heartache from your past intertwines with your present?

The characters in For Now are engrained in my memory. I felt like I knew them, like they were real people I’d want to be friends with. These are my favorite type of books to read, where I exist with the characters and feel like I’m part of their lives. Delilah’s story was heavy and heartbreaking. As a mother, I was saddened to read of her experiences, but I love that Kat included the tough parts of life. I think when we experience the difficulties of life through characters, we as readers can become more empathetic in our everyday realities. For this reason, I love reading about broken characters, as I feel like I am able to grow with them.

Samuel was everything I look for in a male lead. He is gentle, kind, and an all-around good man. I prefer this type of character to the alpha “hunk” any day. Samuel is a single dad who has taken on the role of mother and father with seemingly few hiccups. He rises to the challenge and finds the strength to continue being a positive and light character. His persistence with Delilah was one of the most heartwarming aspects of his character, even more than being a great father. I love how he never faulted her resistance to getting close to him, but instead understood exactly what she needed. Seriously, why can’t we all be a little more like this guy? He was everything!

Kat Savage’s storytelling is stellar with this novel. The story kept my attention throughout, forcing me to finish in a few short hours of reading. There is a twist I doubt many readers will see coming that just about knocked my socks off. As if Kat wasn’t receiving my praise already, that twist certainly won me over.

My only small critique would be for a bit more elaboration on the twisty parts of the story. The point was achieved, but I hoped for just a tad more information. Overall, this story was a solid debut novel, making me anxious to see what Kat will come up with next. The book is beautiful on the inside and out.