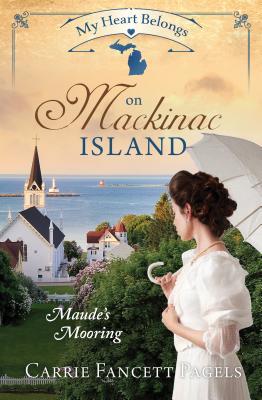 Reading My Heart Belongs on Mackinac Island was the most pleasant walk down memory lane for me. When I saw this title on NetGalley, I had to request it immediately due to the title alone.  I was born in Michigan and have vivid memories of visiting Mackinac Island and nearby St. Ignace as a child, though I haven’t been there in probably 20 years. The book featured scenes around Mackinac Island’s most famous landmarks, such as Arch Rock and The Grand Hotel and other areas around the island. One of the most interesting things about Mackinac Island is its restriction of motor vehicles. All of the sights must be seen from a carriage, bicycle, or on foot. I enjoyed the author’s use of bicycles in the story, making it seem realistic to the actual island, though the book was set in a time period before cars would have been common.

In the first half of the story, we are acquainted with Maude, a young woman who finds she has been jilted by her beau. Her hopes of running the inn that has been in her family for years are dashed by her two-timing lover. Maude’s father’s refusal to turn the business over to his unmarried daughter forces her to take matters into her own hands by getting a job at the Grand Hotel as a maid, to prove her competence in managing a hotel.

Along the way, Maude meets a wealthy German aristocrat who seems immensely intriguing and kind.  She cannot help but be captivated by him after he inadvertently helps her young brother. Unfortunately, this impressive German man also has a secret he isn’t telling, and Maude is loathe to trust anyone after being deceived.

I absolutely love reading historical romance because it allows me to learn and be transported to another era while enjoying a beautiful story.  I have not familiarized myself too much with Christian romance, because in some ways it seems to be a bit of a paradox to me.  I found myself pleasantly surprised with this love story and the Christian elements were the cherry on top of a sweet novel. I will definitely be seeking out the genre more in the future, possibly with more of Carrie Fancett Pagels’ books in the My Heart Belongs Series.

I found this story to be a tad underwhelming in the beginning and decided to take a little break at the worst time. If I would have continued reading the second half of the story, I would have been drawn in and finished reading much sooner. The latter half of this book was full of mystery I wasn’t expecting this story to feature. I was turning the pages as fast as possible to figure out the details behind each character. This is an intricately woven tale, chock full of interesting characters, family drama, and hard choices.

One of the most impressive pieces of information I took away from this novel was the addition of Mark Twain! I was so intrigued, I had to stop reading to open Google and see if he actually made an appearance at the Grand Hotel.  Turns out, Carrie Fancett Pagels did some excellent research of the island’s history because Mark Twain was indeed a visitor. If I had waited until the author’s note at the end, I could have saved myself from my incessant fact-checking of historical novels. I appreciated the clarification of what was fact and fiction within the novel in her end note.

As a whole, this novel had some slow points, but an overall interesting storyline that grabbed my attention in the end.  I enjoyed recounting my time on the island as a child and imagine being there in the Gilded Age like Maude.  I am thankful to Barbour Publishing and Netgalley for allowing me to experience a sense of nostalgia and review this novel for 5171 Miles Book Blog.

My Heart Belongs on Mackinac Island: Maude’s Mooring releases on July 1st. Be sure to snag a copy if you are a fan of historical romance.  This story allows readers to experience one of the most charming and unique places in the United States.